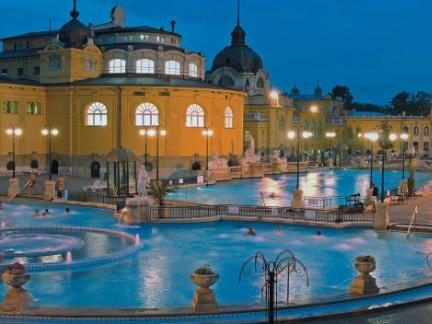 Musicians sitting at the poolside, the audience bathing in the water: this will be the choreography of the late night concert held within the framework of Festival Academy. Besides, genuinely delightful music from three cultures will be on the programme: first, Bach’s Brandenburg Concerto No. 3 written for nine strings and bass continuo, which Bach originally intended as part of a series dedicated to the Margrave of Brandenburg-Schwedt, but its first movement also appeared in a re-arranged form, completed with winds, in a Church cantata. It is almost certain that it was performed in Leipzig in its original form with the purpose of entertainment, even if not at a poolside. In fact, from 1729, Bach would have led an ensemble consisting of local students named Collegium Musicum performing concertos at the Zimmermann Café located at the Main Square of the city, or in more agreeable summer weather, in the coffee garden belonging to the coffeehouse situated outside the city wall. Following Bach’s music, in the Széchenyi Bath, the audience can enjoy operetta excerpts featuring the soprano, the silver medallist of the 2016 International Eva Marton Singing Competition, Lilla Horti, who is marvellously comfortable with a vast array of genres. The night will be concluded by the performance of Lajos Sárközi Jn and his band. Sárközi himself used to be Katalin Kokas’s student at the Liszt Academy, but he later found that his career path would lead to the world of classical live Gypsy music typically played in cafés instead of the classical music scene, and in 2013, he won the national competition for lead fiddlers. It clearly proves Lajos Sárközi’s virtuosity and musicality that his performance invariably make classical violinists of Festival Academy spellbound while they are listening to him play. This summer, they will again have the opportunity to drop their jaws, and should they get too feverish about it, they can simply jump into the water.